On a day like today when the heavens open you need some total self indulgence …and that’s what I got!

There’s no messing in the world of TQ, out of the hotel, down to the harbour and onto Voyager, another luxury motor launch. Cranking up the power as we left the marina the 2000hp engines
roared into life, lifting the bow of our beast out of the clear blue sea and onwards towards Daydream Island only 30 minutes away….

Arriving at the resort we had some hungry mouths awaiting, not our own for once…a pool of stingrays and sharks tame enough to feed by hand! Loaded with prawns I dipped my hand in allowing Pancake the Stingray to take a mouthful as I petted the top of his head leaving George the Cod looking on jealously – your turn will come! My nephews would love it here! 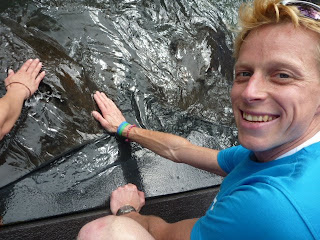 With the rain hammering down I headed to the luxury surroundings of Daydream Rejuvenation Spa to be pampered and preened into a state of relaxed nirvana by the highly trained staff.

Stripping down to the bare essentials I indulged in a ‘Daydream Delight’ – a sensory journey including an exquisite exfoliating salt glow and scalp massage releasing all muscle fatigue and stress and relaxing me like never before! 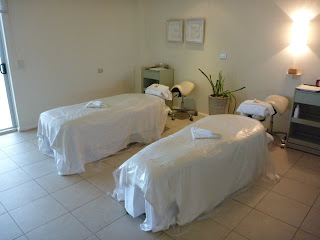 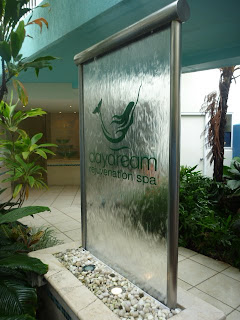 YOU REALLY HAVE TO TRY THIS, IT ROCKS!

Having cameras in my face 24/7 is an experience so we turned the tables on the journalists subjecting them to a little of their own medicine…see how you like that guys!

My legs barely working I staggered downstairs to Mermaids Restaurant to be greeted by a banquet of Aussie delights – rare moist beef, succulent lamb chops, humongous prawns, fresh oysters, lobster and a plethora of salads to boot, a feast good enough for Atlantis himself. 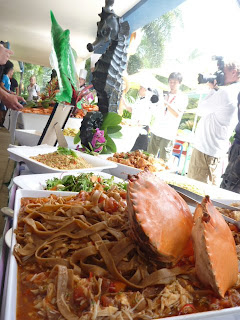 Another whirlwind tour of an incredible island and one that needs another visit sometime soon, thank you TQ!!

Never normally one to suffer from nerves I awoke with a strange feeling in my head and body…there were only two hours to go until the final 20 minute interview with the selection panel and I was starting to feel it, yikes!!

Ok get into some sort of routine here Ben…down to the pool for a few lengths to get the blood pumping, that should sort it out. And so it did…for at least 20 mintues!

As I started the walk to the interview room my legs almost turned to slow motion as I closed in on the door and the interrogation I was about to receive…what a pleasant relief though as I entered the room to a casual sofa, sunny balcony and a smiling row of judges – no bright lights in my face here at all.

We chatted away for what seemed like literally three minutes and then it was over…all of that fuss and worry for really nothing at all, a total relief and as I left the room I suddenly felt 30cms taller – the weight of the world was off my shoulders with nothing further I could do to better my application for the position now. It was out of my hands.

Time to totally relax for the first time in a few days, Ben H from France and I headed to the beach for a swim away from the media and prying eyes and really the first opportunity to enjoy the warm waters of the Coral Sea, we swam, snorkelled and kayaked around soaking up the sunrays and atmosphere of it all – whatever happens now its been an amazing adventure and something I’ll never forget!

Nerves were everywhere, people looked worried, last minute concerned were talked about and we were even briefed on how to greet the first lady of Queensland, The Premiere Anna Bligh – ‘Premiere’ and nothing else!

As the 16 of us filed out onto the stage area we entered a room the likes of which I’d only seen at some of the largest sporting events in the world – and it was all about this the biggest decision of our lives!

It all started simply enough, the pre-arranged questions which each of us had to answer as Anthony Hayes came to us went by without issues and then Anna…sorry the Premiere, took the microphone to start the speech which would change my life.

“…..and the new Island Caretaker, from the United Kingdom, Ben Southall!!!”

TOTAL UTTER DISBELIEF AND AMAZEMENT WAS ALL THAT FOLLOWED!!

I walked to the centre of the stage and was mobbed by the other 15 finalists all very genuinely offering their thanks and tightest hugs imaginable which only added to the wobbly feeling my knees had in them, once the applause had died down from the 200 gathered pubic, media and TQ staff I took the microphone from the Premiere and prepared myself to address the entire planet about my new life!

I’ve always shied away from public speaking but will also reluctantly do it if pushed and this was one of those occasions…time to show them all why you’ve been chosen Ben.

With the initial thank-you’s out of the way I turned to my fellow finalists and thanked them all still rather blown away by the decision and the fact that I was now experiencing the start of an amazing journey together with 8hrs of interviews with news and media from around the world.

I lost count after I’d spoken to the tenth camera crew and interviewer as to quite how many feeds were being beamed across the world to channels and shows all following this the greatest PR stunt the world has ever seen….CNN, FOX, BBC, Reuters, Time magazine, CTV, The Times, Channel 7, 8, 9 & 10 they were everywhere and the more it went on the better it felt as my responses became more practised and the adrenaline was replaced by satisfaction and pure smiles. My cheeks were starting to feel it….stop smiling all the time Ben!

Once we’d cleared the final live feed, sometime around 21:00hrs I raced back to my room changed into something a little smarter and more presentable than the standard Best Job in the World t-shirt and made a beeline for the huge party that TQ were throwing in the Toucan Tango bar with all of my fellow finalists, supporters and all the others celebrating the end to an amazing four month adventure.

The music was pumping, the food was mouth watering and the drink was flowing for everyone except me….too many interviews still to do tonight you know, until I was ushered out of the function room and back to face the next of the feeds as America was just about waking up and needed to know all about the new Caretaker apparently.

I finally hit the hay around 23:30hrs and struggled to get to sleep as the adrenaline was still pumping around my body from the total excitement of the day.

I took the time to call Bre, away from the cameras, to let her know quite what the next few months involved and how I couldn’t wait to be back with her again so much sooner than expected. The unhappiness of not knowing when that would be had been replaced by the joy of a new job, and date to work towards. We are going to have such an adventure together!

The world of crazy coverage didn’t stop there though, before I knew it my alarm was ringing and it was suddenly 05:30hrs, time to get back down to the media centre for the next of the interviews…BBC World Service, BBC 4, BBC Solent, local radio in Aus, radio in Columbia, Malaysian TV, CNN again, the list went on and on! And then at 08:30hrs a break and the moment I’d been waiting for…time to get the keys to my new house – The Blue Pearl!! WAHOOOOO

Sitting down in the golf buggy with Ems driving we headed to the house I’d looked around just over three days ago but this time there were no other finalists there – just me and the world’s press again. I walked through the doors and suddenly the place seemed huge, in fact so big I’m scared I’ll loose Bre down one and of the house and not be able to find her!

Plenty more photos followed and then my first chance to dip into the spa to test the water and carry out my first task as Island Caretaker – cleaning the leaves out of the pool! This is the best spa I’ve ever been in, it has a lap pool built into it so put the motors on and it turns into a current machine which you can swim against as exercise – totally awesome!

Walking around the house there’s so much here, huge sofas, three double bedrooms, spa bath, state of the art media centre, fridge with cold water and ice (I’ve always wanted one of them!) and of course a view to die for over the Coral Sea. Thank you TQ so much from the bottom of my heart.

What a feast indeed!!! yummm

great read but the spelling of PUBLIC has an L in it, the media will get you for this if they see if before you change it LOL

First, congratulations on your selection. Can't wait to see all the things you report during the next year.

Second, my wife and I were just there in November, in fact, it was the day Obama was elected. We were on Hamilton island getting ready to set sail the next day. Make sure you go up into the Nara inlet and see the aboriginal cave painting!

Third, I'm embarking on a similar journey for A Really Goode Job here in America. Murphy-Goode winery is doing a similar hiring process as the one you went through. Do you have any suggestions?