Down to Cornwall and into the water again...

Before I disappear for the next six months to start my job as Island Caretaker on the Great Barrier Reef there are a few important people in my life I had to see before leaving the UK's shores. Over the past few years a number of friends have left Hampshire and headed west to relocate in Devon and Cornwall and when you get down there you can understand why!

Still loaded and prepared from last weekend's exploits up in Scotland at the LAMM; Jon, Paul and I left in the Colonel (my trusty Land Rover and home for all of 2008) on Thursday and headed down the A303 towards the west country ready for a weekend of ocean based activities.

There's something great about going away on a mini adventure even if its just for a few days; the long drive, the camping, the little country lanes, the sounds and smells of the ocean and the countryside are all a welcome reminder that you're somewhere different that needs exploring!

Six hours after we'd left we dropped down the final descent from St Keverne into the sleepy hollow of Porthkerris where Dave and Turkey live to find their perfect little world exactly as I remembered it....but this time with Turkey running the catering wagon, flippin' burgers, blending cheese and generally amusing the locals with his own brand of questionable humour! 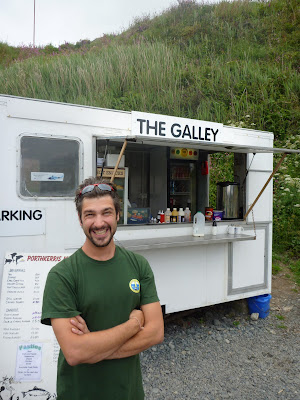 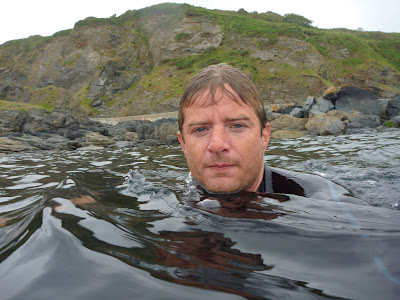 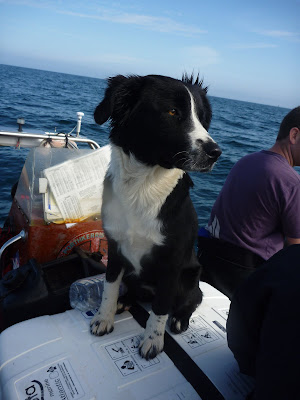 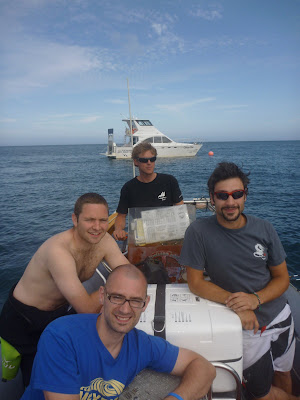 Being able to take time out from a hectic lifestyle is essential and something I really don't do enough of; its only when I get the chance to breakaway and head to one of the more remote parts of the country that I actually realise its good for the human soul to rest up, relax and let the sound of the ocean massage the brain into a trance like state - a one of the first real
opportunities to think about the job as the Island Caretaker.

Since May 6th back on Hamilton Island when Anna Bligh made the announcement that I'd won the job with Tourism Queensland life has been even more hectic than normal. I thought I used my days up pretty productively, planning a festival, plotting the next expedition and in between all of it trying to keep as fit as possible...but this has turned even my energetic lifestyle on its head.

Every day I talk to someone new, every day there's a different person contacting me from a another country and its truly amazing to have the chance to speak to everyone of them. We have a chuckle at each others accents, we struggle to understand each other sometimes and very often the time zones of the world just aren't taken into account as my phone rings deep into the night waking me as I dreamily ponder what the next few months will bring; adventure, the ocean and a vast amount of discovery.

As I count down the final days to my departure from these shores the last week has provided me with an interesting insight into just how the press can work, I have the deepest sympathies for some of the 'real' celebrities out there and can now understand how they have to watch everything they say just in case its taken the wrong way, let me explain....

Situation is this - I meet up with a good friend Ben Patterson on the way back from Scotland who's organised a meeting with a lady from the Press Association. We take a few, photos on the beach where I used to go as a child on holiday as a bit of promotion for the tourist industry in the north east (Bamburgh, Northumbria), she asks me a question....

I answer as honestly as I can.....Mum's Sunday roasts, long summer's days, music festivals - genuine answers to a genuine question.

However the way the Sun newspaper in the UK and several in papers in Australia decided to take the answer in a slightly different way and labelled me the 'Whingeing Pom' - brilliant and totally taken out of context. Oh you gotta love the media. Have a look here and here for my response a day or so later....yet more laughs!

Those good bods at Tourism Queensland are right behind me though and came back at the papers with their total support for me in a few articles which followed up on the story, a taste of things to come I think.

As I sit here in my hotel room, having just come from Talk Sport Radio where I was a guest presenter for an hour on Ian Collins show, I'm thinking about the amazing opportunity ahead and the incredibly exciting six months of adventure and experiences which lie ahead.

The clock is ticking and the final week here in the UK is going to fly by, I have two full-on days of promoting the BBC documentary (which is out on July 2nd, 9pm BBC1) to come next week, an evening meeting the Governor of Queensland and then two days to pack everything I need into my bags before hopping on a plane to the other side of the world again where I'll meet my girlfriend Bre and move into the Blue Pearl residence under the watchful eye of the assembled world media once more! I cannot wait.

The limited details I've been given so far of the first six weeks of the job look jaw-droppingly exciting...diving at Cod Hole on Lizard Island being one of the obvious highlights as I try and dive as often as possible in an effort to get my Advanced PADI certification, I really want to dive on some wrecks and to do that I'll have to pass another course but they're all things which I look forward to ...maybe with the exception of sitting another exam!

This week has been particularly busy with three full days of interviews and appointments, I've tried really hard to give something back to the younger people in my area by organising some presentations at local schools, visiting my old primary school where I went for a year at the age of 10. It was so amusing going back to Ropley School and seeing quite how its changed, the secretary, Mrs Price, is still there and very kindly showed me my excerpt from the year book of 1986 along with a very embarrassing picture which the children all laughed at as only they can! 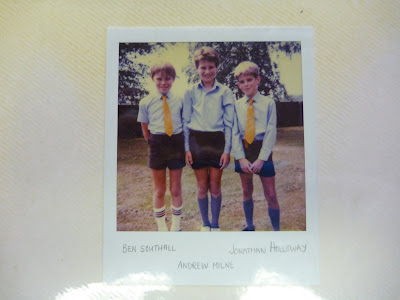 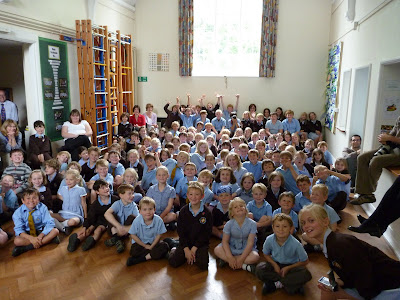 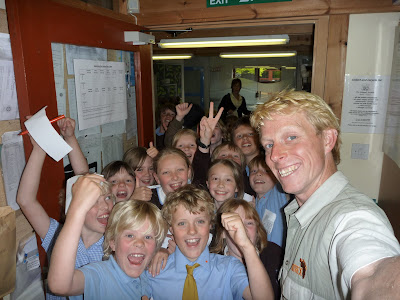 My 20 minute presentation told them all about last year's project Afritrex along with a little glimpse of what the Island Caretaker role will involve over the coming six months. Its amazing how different and almost nerve-racking it is presenting to 100 children....but they listened like mice and ooo'ed and ahh'ed in the right places as I showed them pictures of the African wildlife. A very rewarding experience all round.

On a bit of a roll I repeated the presentation to Liss Junior School this week, but this time there was the added pressure of addressing 250 children whilst being filmed by a French TV crew from the TV1 channel. It doesn't get much tougher than this.

Nicholas and Arnaud are filming a short feature for a current affairs program which goes out late in July and for their take on the story had me swimming in the Solent, chatting with friends Paul and Rachel over dinner and even came with me as I recorded the voice-overs for a BBC program called Inside Out, which I guest presented and goes out in September. Its been a busy week.

I have to mention another local adventurer from the Petersfield area where I live, Tom Heal who together with his good friend Will Smith who leave the UK at the end of the year in an attempt to become the youngest team ever to row an ocean. Find out more and support them at http://www.atlanticrowyt.co.uk/

We spent an amusing hour together having some photos taken for Life in Petersfield magazine around the lake in our fantastic home town! Best of luck to them both with their fundraising and training. Arghhh hours on the rowing machine - my least favourite item in the gym.

Being my final weekend in the UK I've organised another farewell party at the Mill Tavern, which people are welcome along to if your in the area, and then the countdown really is on....
In a week's time I'll be flying out to Brisbane to start a new job
AND I CANNOT WAIT WAHOOOOOOO!!!!!!!!!
Posted by Unknown at 23:28

Looking forward to your Australian adventure and living vicariously through you. You'll love the cod hole. It was our first dive on the reef. They are amazing. We'll be back in Australia in 2010 but this time on the west coast--first time there but fifth time visiting that beautiful and exciting country. Have fun!!

wish u for t5he comming half year all the best and a wonderfull, never forgetable time. I hope, u will post many pics and write something from this place i can only dream :)

ooh I'm going to be in Brisbane and the Gold Coast August 15-24 wonder if I can get an autograph from this famous Ben coming to our shores to be the Queensland Barrier Reef ambassador!!
Good for you and you deserve the job!! Although it would have been nice if I could have gotten it hee hee

Oh I just read the article calling you a Whingeing pom..how dare they..they're just jealous. Dont worry about them Ben, you're going to do the job well and make everyone proud of you so tell them to get nicked and have an awesome time with Bre

hi, ben! it's going to be a great 6 months in aussie for you, i'm sure. and i think people will enjoy reading your adventures and stories about the great reef and life as caretaker. i've been following the island caretaker news and i'm glad they picked you. :D

All the pictures are very amazing you enjoyed alot.It very exciting to go inside the water and see the underwater animals.Also dangerous creatures such as sharks are around but may pose no threat. By playing this wii diving game you have access to a large aquarium habitat.Army rations

I have to mention another local adventurer from the Petersfield area where I live, Tom Heal who together with his good friend Will Smith who leave the UK at the end of the year in an attempt to become the youngest team ever to row an ocean.


I really loved reading your blog. It was very well authored and easy to understand. Unlike other blogs I have read which are really that good.