Frolicking in the sunshine on the Isle of Wight

In the run up to leaving the UK at the end of June I've kept myself as busy as possible and finally after a few months of trying have made it to FARM-Africa and IDE-UK to present them with the remainder of the funds which Afritrex raised last year, the total for all three is now just over £20,000. 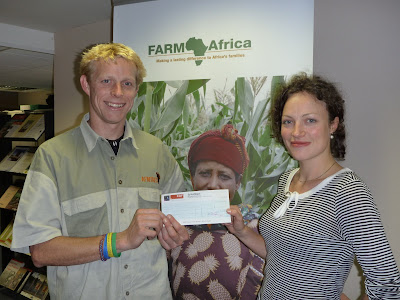 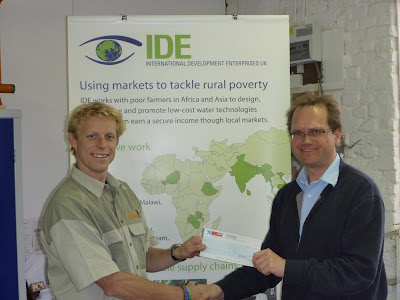 BBC INSIDE OUT FILMING - THE ISLE OF WIGHT

Time to take on a new challenge Ben and this time not a physical one but a mental one - how about appearing as a guest presenter for the BBC......eeek, not an opportunity to be passed up. So my girlfriend Bre, Jane the producer, Joe the cameraman and Ian the soundman all headed to the Isle of Wight (just off the south coast of England) to film a program all about this gorgeous little gem of an island and what is has to offer as a tourist destination.

I remember when I was about 5 years old (yes a stupidly long time ago I know) my Grandma and Grandpa sent me a postcard from the island and it looked something like this..... 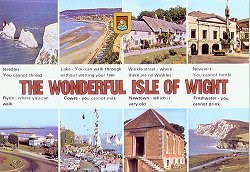 ...describing the Wonders of the Isle of Wight, I still remembered four of them and they are:
Coasteering

First stop of the day was to be Freshwater Bay to try something I've always wanted to have a go at, Coasteering - the process of jumping over rock archways, swimming through wave filled gaps, climbing up cliffs and ducking under water into invisible caves.

Arriving at Isle of Wight Sea Kayaking we met Owen our instructor for the day as I tried to persuade Bre to take to chance to dip into some freezing cold English water....for what I guaranteed her would be some fun! 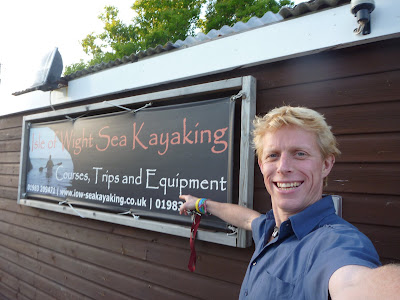 We kitted up in our wetsuits, buoyancy aid, booties and helmets and all trundled off along the promenade towards the waves which were crashing onto the chalk cliffs making the heart rate raise just a little as we dipped our toes into the ocean full of expectation for the experience which lay ahead.

The waves continued to build as we swam out into the swell keeping close to the cliffs but just far enough away not to be pummelled into them and as we turned the corner the first of the caves came into sight. Owen leading us very expertly all the way offering guidance on the best way to take on this new form of adventure with a BBC underwater camera strapped to the side of his helmet.

We continued for another half an hour along the coast, clambering up the sharply hewn rocks, jumping off the higher ledges and swimming through some amazing caves and tunnels until I turned to look at Owen....and the camera was missing, oh crap there goes the best of the footage then!

Back on dry land we made our apologies for loosing the camera, dried off and headed back to the Colonel before leaving for the other side of the island after a wicked experience attacking the coastline with a very different and exciting approach to water sport.

Steephill Cove is a little piece of treasured history which really hasn't changed for the past 500 years and when you arrive down the steep footpath you can understand why - its the only means of access, apart from by boat, to the collection of fishing cottages. The Wheeler family have owned the vast majority of these amazing little houses since the 1400's along with the cafe and restaurant, Dave being the oldest member of the family. His official name is Dave Wheeler MBE, or the Island Caretaker! He was presented with his MBE a few years ago for services to deckchairs of all things, and when given the opportunity to go to Buckingham Palace to receive it he refused saying he didn't want to leave the island. In the end the Royal Family sent a Lieutenant to present it to him! 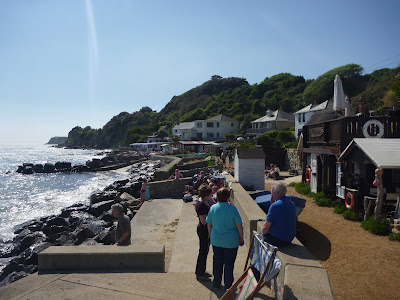 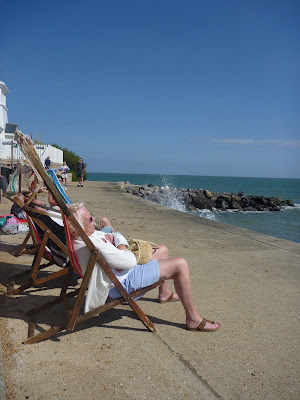 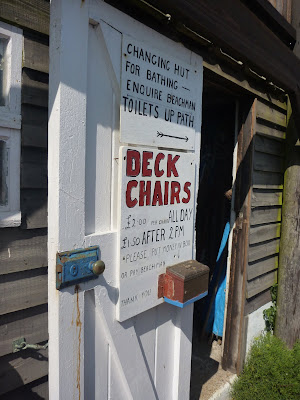 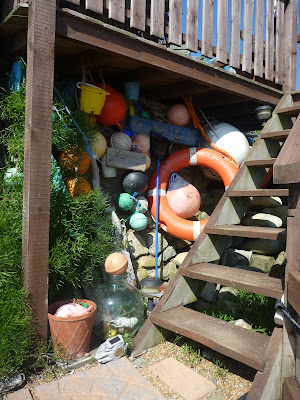 Dave's extensive family live here and every day his two sons Jimmy and Mark head out in their boat to check the crab and lobster pots, the catch from which supplies their wives with the supplies to run the cafe (famous for its Crab Pasties) and the restaurant. Real cottage industries which thrive here during the warmer months of the year.

Simon from the Ventor Blog stopped off to meet me and as we wolfed down a pastie he explained to me the tools of the trade I need to be employing to make my blog writing more interesting and interactive to all of my followers. He and his wife have been publishing their works on the internet for a number of years and were great to chat to. Thank you to them for their information.

We raced back across the island to meet Owen and Tim who'd kindly offered to take Bre and I out Sea Kayaking for the last activity of the day, we launched just past Yarmouth and as we paddled along the coast trawled some lures for anything we may be lucky enough to catch in time for dinner.....wishfully thinking, we caught nothing and instead headed to the Fish n Chip shop for a guaranteed catch! 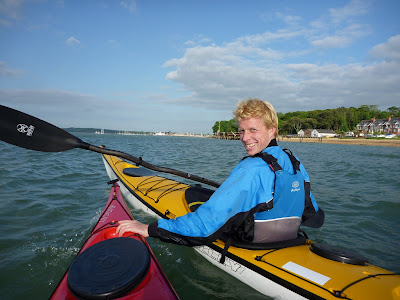 Bre and I retired for the evening to a fantastic cliff top campsite called Grange Farm where the owner had very kindly reserved the sea-view site for us and for the first time since January we erected the tent atop the Colonel. A little warmer than last time from -5c up to 15c, excellent. 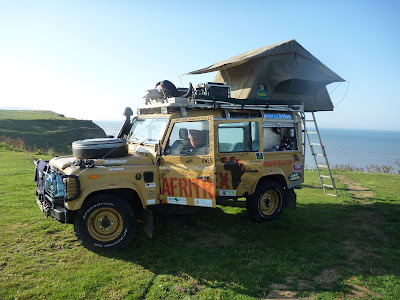 Our last day on the island had more adventure and new experiences tied into it, starting with a visit to Alverstone Mead Nature Reserve to feed the resident red squirrels. 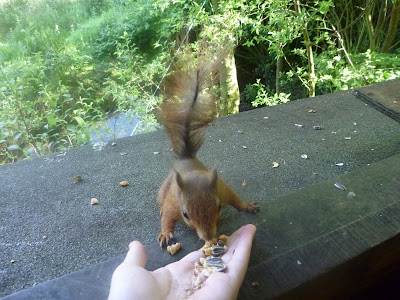 Red squirrels are the only squirrel native to the British Isles. They are disappearing from the mainland fast and are being replaced by the introduced American grey squirrel.

The Isle of Wight is an important stronghold as the Solent provides a barrier to grey squirrels. However a grey does find it’s way to the Island sometimes, so we need to be vigilant. There are contingency plans for dealing with greys that arrive on the Isle of Wight. Not only do grey squirrels outcompete reds, they carry the deadly squirrelpox virus, which is fatal to the reds.

It is illegal to bring a grey squirrel into red squirrel territory. The penalty is 2 years imprisonment or £5,000 fine. It is also illegal to release a grey anywhere, once it is caught.

Talk about cute, these little red-haired creatures rock and truly do feed right out of your hand, as soon as you crack a nut they come scampering across the roof of the hide and peer at you through their little black eyes. If you give them a whole nut the effort of breaking into it is all too much and they disappear off to bury it in preparation for the winter...in somewhere they no doubt forget about!

John and his group of volunteers had done an amazing job at preparing the woodland which surrounds the hide and provides a multitude of different environments for the local wildlife to thrive in. 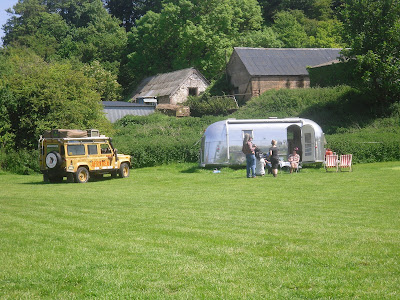 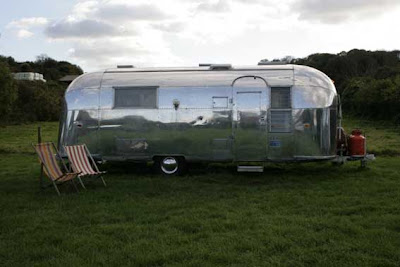 Another little hidden gem on the island, Helen and her husband have been running Vintage Vacations for a number of years in a quiet little field in the centre of the island offering a little taster of yester'year and the opportunity to stay in one of their immaculate Airstream aluminium caravans, or Land Yachts.

Talk about bright on a day like today, the sun glared off the perfectly polished body but as I walked inside a 1960's decor made me feel much more welcome...as did the swiss roll which we all munched by the plateful!

Triptracker GPS recording of our route around the Isle of Wight
Click on the link below to see exactly where we went on our little adventure.....

It looks like you are making the most of your time in the UK prior to leaving. I am sure you will miss it but the South Pacific is so gorgeous that you will probably have a hard time leaving it.

I loved New Zealand and kayaking in the Abel Tasman, lived there for a year. And then I worked as a ship doctor on board the Pacific Dawn off the coast of Australia to Vanuatu, New Caledonia, Fiji and Tonga.

I fell in love with it and I am sure you will as always. I have bookmarked you and can't wait to read all about your adventures.

Found your blog as I was checking to see if your dream job started yet. What great adventures you have! And I love the enthusiasm you tell them with. Will you be using this blog or starting another for the job? Australia is a very favorite place to visit and we'd like to follow your adventures there. Best wishes! Have a great time!