Now that's how to spend a weekend away......out of work at 17:30hrs on the Friday night and straight onto the road out of Hampshire heading West toward Cornwall to meet a couple of friends.

Destination Porth Kerris on the Lizard Peninsula for a couple of days of amazing experiences and hopefully good weather, my good friend Dave Brown lives there and works as a dive instructor at Porth Kerris Divers where I'd be refreshing my underwater skills and having my first real contact with some damn chilly water. I only learned to dive last year and obtained my PADI accreditation in some of the warmer waters of the world - Lake Malawi and the Red Sea so up until this weekend I'd been totally spoilt with the amazing environments I'd be lucky enough to dive at.

The four hour drive can sometimes be a total ass of a journey down, the end of the school holidays and the fact it was the start of the weekend didn't bode well at all but as we cleared the usual traffic bottle neck of Stonehenge the roads seem to clear and we made it just in time for last orders at the pub!

Getting up to swim every weekday morning rather annoyingly sets my body clock for me so unsurprisingly I was first up at just after 6am and decided not to waste the morning so headed down the track from Dave's house to the ocean below lapping quietly at the pebbles with its rhythmic swishing sound and decided to take some photos of the misty, grey atmosphere I found myself wrapped in....enjoy! 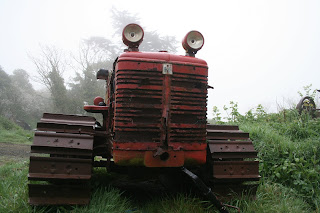 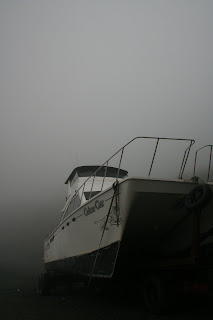 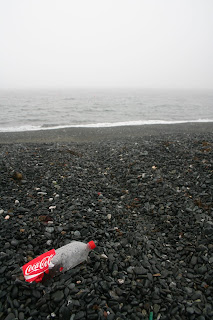 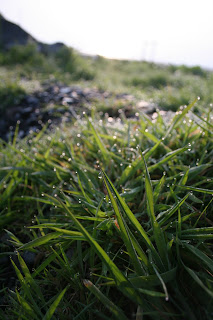 My bestest buddy Jay lives on his own yacht, Curlew, which he moors just outside Falmouth so we arranged that he'd sail across the bay to meet us for a morning of sailing and relaxing abroad his stunning investment....but the weather just wasn't playing the game. Every minute the sound of the foghorn resonated across the water warning anyone crazy enough to try moving on the water the position of the mainland, pretty difficult to see through this pea soup. He'd have been foolish to have tried going anywhere at this stage so we had to play the waiting game until finally as mid morning arrived the blue skies and sunshine started to show their faces for the first time that day! Hooray! 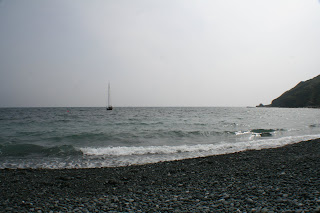 In their continued effort to film everything that I enjoy doing, the BBC had arranged to come down for a short period of the weekend to film us sailing and diving....they'd be sorely disappointed though, the fog and lack of wind meant the closest we got was rowing out to the yacht as it was moored in the Helston River!

The afternoon continued to improve so we all made our way back to Porth Kerris as I prepared for my first dive in nearly 4 months...what a contrast to the last one as well, 26c in the Red Sea plays against 10c and English Ocean!! Brrrr

Dave's a great instructor and ran me through my safety procedures again before we donned our semi-dry suits, checked tanks, checked each other, talked our way through the dive ahead and then grasped the rope in our hands which led us down the rocks to the pebbly beach below and made our way to the waters edge. 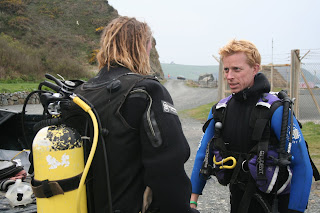 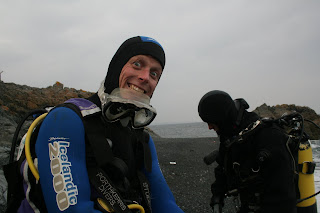 Time to do my best to protect myself from the freezing ocean I'd be lowering myself into very soon. Now I suffer from the cold anyway with numb fingers for no reason (hence my decision to visit warmer climates for the last 12 years) so all protection was taken to protect my extremities...gloves, hood, double suit - the works! 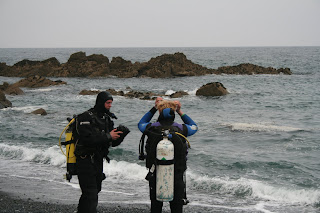 We gave a final safety check to each other and walked into the small waves lapping at the shore, slowly lowering ourselves into the clear cold water all the time becoming lighter and lighter as the weight was taken from our bodies by the buoyancy of the salt water. Masks and fins on, one last ok and then under the water..... 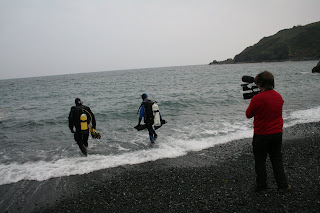 WOW I'd almost forgotten how good it felt to be diving under the water, flying and floating perfectly as I steered myself behind Dave through the kelp beds which twisted up from the ocean floor some metres below. My first impression were not of the cold instead of the superb clarity of the water with visibility up to around 15m allowing me to see far off into the distance towards the sheer rocks which make this dive site one of the best in the UK.

The abundance of life around really surprised me too, yes its the ocean and yes its Cornwall but to see anemones, starfish, prawns, crabs of all sizes, dog fish and plenty of other white fish swimming around really blew me away and gave me something I thought I'd never say about an dive in the UK....a real sense of pride about what my native land's shores have to offer. There's so much to see in lake Malawi, The Red Sea and the Great Barrier Reef as everybody knows but to see this in UK waters was eye-opening and spectacular!

We dropped down to 17m as we cleared the easterly tip of Dawana Rocks and made our way back inshore until we'd reached our beach exit point and clambered awkwardly out of the slight surf...I tried to speak to let Dave know quite how amazing the experience was but my bottom lip was frozen solid and wouldn't work so all I managed was a series of muffled barks...much like a seal trying to speak I imagine!

Once we'd packed up, dried off and put some warm clothes on we headed back to Dave's caravan come house for a hot cup of tea and some scoff...surprisingly tiring all that exertion you know and well deserved. All in all a fantastic experience and one that I'll repeat again very soon I hope with just the Great Barrier Reef in between of course!