The final 50 (which became 48) applicants from around the globe must have been doing pretty much the same as I was on Thursday night, biting nails, twiddling fingers and generally annoying those around them with the nerves which were building up pending the decision by Tourism Queensland on who would make it through to the Final 16 for The Best Job in the World.

I'd not felt anything all day in the Thursday as being involved with my job from 7.30am until 5.30pm during the busy season doesn't really give me any time for anything else..but as I got into my car and started the drive home it started to dawn on me that the decision into who'd be going through to the final was now only a few hours away and the stomach started to feel a little different - the chrysalis was twitching and becoming a butterfly! The last time I felt like this I was 216m up on the Bloukrans Bridge in South Africa about to throw myself off it!

BBC Wales have been with me on and off for the last few weeks filming the background to a documentary which followed all four of the UK applicants (Sarah Louise, Holly and Doug) as we went about our own very secretive press and marketing campaign around the UK, and tonight was to be no different.

I met with Agnieszka and her husband Stuart at Alton Sport Centre where I head every week to pursue another love of mine, climbing. My good friends Rich and Sam were along for the night and under the pressure of the camera we picked our way to the top of the routes whilst trying to keep straight faces as our tired limbs struggled to make it through another 'take' just to get the perfect picture.

At the end of the session we all went our own ways with Agnieszka and Stuart following me back to the comforts of my house in Ropley where a sumptuous fish pie awaited us ready for the pending decision. Mum had cooked up a storm and we took our places around the dinner table, phone on charge, camera rolling ready for the anticipated decision which was due at 11.30pm

The clock ticked away, the impatience grew - mainly from Agnieszka I hasten to add, and then the phone started to ring....

"Shall I get that" I enquired
"YES OF COURSE YOU SHOULD!" came the reply

"Hello Ben speaking" I nervously answered...
"Hi Ben its Peter Lowlor here from Queensland, how ya going mate?"
"Ah very well thanks, how can I help you?" - as if I didn't know!
"Congratulations mate, you've made it through to the Final 16 for the BJITW and I look forward to meeting you out here at the beginning of May!"
"Thats awesome, I can't wait - see you there" I think I babbled down the phone to him...

The obvious celebrations followed with Mum and Dad cracking the champagne open and me racing into the study to get my girlfriend Bre onto the webcam to break the good news to her on the other side of the planet. 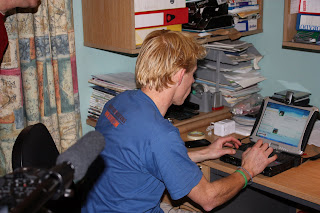 "You're not going to believe this baby...I'm through!!"
"OMG you're joking!!!" Came her startled reply

Its got a couple of big meanings really to get through this far, obviously the chance to get out onto the Great Barrier Reef and to swim, dive, snorkel etc is a massive excitement, but it also gets me one step closer to another dream of mine - being back with my girlfriend who's out in Canada and being given the job will mean she can come out to the island to join me for another six months together. It was clear to see how excited she was!

After a drama had calmed down and the camera had stopped rolling it was time for bed before another early start ready to deal with the UK's media enquiries....as if I could sleep!

My plan for Friday 3rd was to visit the three charities I'd raised money for with my Afritrex expedition. The BBC were at the house bright and early and we started the shots they'd need interviewing Mum and Dad and their reactions to the success of my application for the role. Finally we made it out of the house and hit the road to London with Agneiszka
onboard the Colonel for the first time.

We arrived at the Royal Star & Garter Home, where I used to work, the first of the charities I hoped to see to hand over a big cheque for last years efforts in Africa.

There's been a change of CE at the charity so I met Mike Barter for the first time and handed over my cheque to him in the surroundings of the stunning garden at the Home which overlooks the Thames from up high. Together with the appeal which the Home sent out the total raised for them was £15,701.22!! 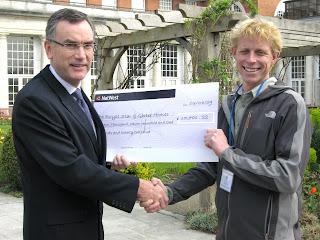 How does time disappear so damn quickly?!? Before we knew if half the afternoon was gone and we had to abandon the idea of visiting my other two charities much to my disgust, this filming thing takes longer than you'd ever imagine!

Instead Plan B swung into place and made a beeline straight for the headquarters of Hills Balfour Synergy, the PR company who handle all of Tourism Queenslands campaign where Jane, Anna and Daisy work and between them, and others from TQ around the world, decided to select me as the representative from the UK who's make it through. Very important people in other words so when you tell them you'll be there....YOU HAVE TO!!

London traffic - something I really will never get used to or miss, African roads are bad, African drivers are acceptable but London just eclipses everything I witnessed last year including the chaos of Accra! It took nearly 90 mins to drive the short distance to their offices and then we had to sit around whilst the camera-crew arrived....edging ever closer to my next appointment at the BBC studios at Millbank scheduled for 6.30pm!

It was awesome seeing the girls again, we shared a celebratory drink, checked out the stats from the coverage the story had been receiving that day and talked briefly about the next few weeks. I hope to be in control but I feel it'll be another rollercoaster of a ride all the way to my departure for Aus at the end of the month.

Ten minutes later I had to rush out of the door to make the 2-stop tube ride to Westminster and sprinted across Parliament Square to the amusement of the tourists and police assembled there on a sunny afternoon, and fell into the offices of the BBC with 5 minutes to spare. I plonked myself down in the link room, mopped my brow and prepared for the light on the camera to turn red.

I felt a little apprehensive talking for the first few seconds to a room with no one there but the technician, but then got into my flow and ended up loving it, this limelight this is really good fun!

A great 2 minute feature was beamed live into the South Today studio in Southampton and then suddenly it was all over with the appointments for the day having been satisfied, well very nearly - I have to get to the other charities at some stage but a full-on day of media based coverage was over.

At least I thought is was....driving out of central London the phone rang for the gazillionth time with a happy sounding Chloe on the end from BBC Five Live asking if I had 5 minutes to do a pre-record for their Outlook program, of course I would - its the station I listen to on the way home from work every day! I stopped at a friends house for the night, found a quiet room and delivered my final interview of the day.

Wow quite a first day as a finalist! 5 x radio interviews, 3 x newspapers and one TV appearance - all in a days work!

I almost fell asleep before I got into bed....time to count some valuable ZZZZZ's

Congratulations my dear! How exciting for you! Keep us all updated! :)

Maybe you can share your 500 words essay that you have submitted to TQ. Congrats again.

Hi Ben - huge congrat's! Could you get in touch with me as would love to run something by you before you head out in May... Emma x

I wasn't in the race, but followed it from the beginning. CONGRATULATIONS!!!

Congratulations Ben, I've been following this since it was announced that the job was on. I already live in Australia so I will look forward to reading your updates on the best island in he world, it has always been my dream to visit Hamilton island, so please do a good job of selling it to me

What model laptop is that in the picture?

Ramblings of the Rubbla said...

Saw you on Canada Am this morning and am very interested in the 'rabbit plan' you mentioned. Any links/books or anything you can recommend to learn more?? Congrats on your new job too - looks like FUN !!

Thanks in advance for your reply
Heidi

Great post with nice insights. It would help me a lot. I just love online shopping and would like to mention that great deals are available
here.