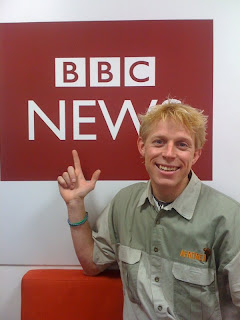 After a particularly quiet Friday night spent with friends at a restaurant in London I hit the hay early to get as much sleep as possible before the second day of media attention following the announcement of the Final 16 for the Best job in the World.


I clambered into the Land Rover (The Colonel for those who don't know him from last year's exploits http://www.afritrex.com/afritrex_the_team_landy.php) but it felt weird driving across London in what really was my home for the last year for the entire expedition. Land Rover's in London are generally frowned upon as Chelsea tractors - and rightly so! Do you really need a big 4WD to get up the kerb and into your gravel driveway?!!

Still The Colonel stands out and gets a few looks and thumbs up as Bacchus the Buffalo (who made it all the way from South Africa with Bre and I) looks proudly out from his rooftop position overlooking the front of the Landie.

I pulled into the BBC Television Centre at Wood Lane and the familiar looking building was strangely empty...it was 7.30am on a Saturday morning but I had hoped to bump into Sir David Attenborough, Jonathan Ross maybe or even Fern Cotton...but there was no one around at all! I made my way to the stage door reception and still no one...what should I do? Spotting a sign on the wall clearly saying BBC Breakfast I followed it all the way to the studio - which was empty!?!? Wow I know the BBC is struggling for funds but not having anyone around was a little disconcerting. I made my way back to reception and sat watching the programme being broadcast from somewhere within this huge concrete monster...but where!?!?

Finally Antonia rang and asked if I'd arrived!! She came and met me at reception and led me straight into make-up.....bloomin make-up!! Apparently I was 'shiny' even though I'd only stepped out of a shower an hour before so had to succumb to the same brushes and pampering everyone else does who goes in front of the cameras. Industry standard darling :)

Sat in the Green Room waiting was an interesting experience, there were three school-girls who'd met Michelle Obama the day before, a single mum discussing goodness only knows what and the weekly newspaper reviewer Simon - we made quite a mixed bag and had some funny chats about our circumstances and our short lived fame!

It was all getting a little more serious now, the initial racing heartbeat and clammy hands of the first live interview on BBC South Today only 13hrs previous to this were a distant memory, but the pressure of keeping it all together and reporting the answers to more unknown questions in a professional manner kept the concentration levels max'd out as I sat and waited patiently for the nod, and then it came....

Into the studio I went with the knowledge that this broadcast was going out live to the entire UK on BBC1 and even over the entire planet on the BBC satellite network to a potential audience of billions...no pressure then! What a surprise the studio was though, the presenters Charlie Stayt and Sonia Deol had a bank of auto cues in front of them, the traditional red BBC desk and nothing else really - no studio team, no directors nothing!

Miked up as I came into the room by the only other person working there I sat down on my stool and chatted briefly with my interviewers off-air before the feature being played to the viewing public ended...and it was my turn, I felt the throat tighten slightly as I happily watched my application video played once more but this time to the country. I must have heard this thing a thousand times now but to see the presenters enjoying it was a good reflection on how a newbie to it must feel...something I'd rather lost since January when Bre and I made it.

After a few questions on air, during which time they played the TQ promotional video for Hamilton Island, it was all over and I felt pleased with the way it had gone...no stalls, staggers or blunders - a success then.

The second appearance at 09:45hrs went even better, more relaxed, flowing answers and a comfort level i now felt happy with - TV actually rocks! As I finished the feature Antonia told me that BBC World Service had been in touch and that they wanted to do a pre-record radio interview downstairs so we made out was to what must have been THE oldest building at Wood Lane...certainly no one had decorated it for since at least 1970....gorgeous brown and beige trimmings and walls, yummy!

A full on morning of media presentations out of the way I left the building, climbed into the Colonel and drove back to Hampshire for some well earned rest!

P.S. I think I'll put as copy of my 'short-story' up in this blog sometime in the next few days so you can see what the second stage of my application was all about and maybe even why they chose me to go through....

Happy Easter to you all :)